The Quickest Forever is about disruption and contradiction, nature and language, abstraction and representation. The paradoxical title captures a state of disorder and tension that lies just below the surface, and alludes to time passing into the stillness of eternity. Through the progression of the book, the stratified and geological shifts in space and time are transmitted from the external world to one’s internal landscape. 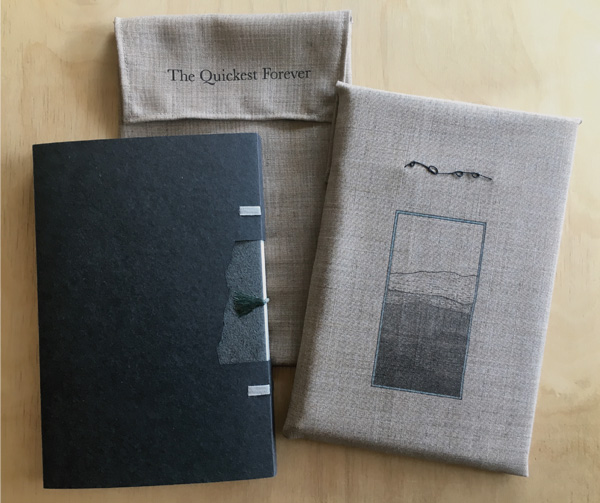 Inge Bruggeman, who serves as Assistant Professor and Area Head for the Book & Publication Arts Program and the Black Rock Press in the University of Nevada Reno’s art department, used similar techniques in previous artist’s books such as The Infinite Between Us (2011), which also features geological and geographical elements. Her work hints at meaning coded in the pages with the use of abstract imagery, the layering and unfolding of different papers, and expressive and creative typography employing color, shape, multiple typefaces, and drawn letterforms that go beyond literal words.

The Quickest Forever is housed in a linen sleeve printed with a window-shaped illustration revealing a glimpse of a mountain; hovering above that is an embroidered chain of black thread. These shapes, images, and materials are repeated within the book. The organic earthiness of the binding, with its exposed structure and partially visible sewing and the stonelike texture of the handmade Cave paper, is in keeping with Bruggeman’s stated influences for the work: Orra White Hitchcock (1796–1863), a prolific 19th century botanical and scientific artist, and the multimedia artist Robert Smithson (1938–1973), best known for his land art piece Spiral Jetty.

After a conventional title page the first line of text reads, “The axis splits into a chasm in your hands, / thus you begin your travels by being immediately lost…” By using the book’s inherent structure—the first half of the line on the left-hand side of the page spread and the second half on the right—this rupture is physically demonstrated by the gap created by the gutter and the use of two papers with distinct textures and colors (Zerkall and Cave). There is a recurring motif of knotted lines either of actual thread or printed: crossing, almost converging, single, double, braided, and looped/chained. According to Bruggeman, these illustrations were inspired by the quipu, a counting and recording device used by the ancient Incas.

As one reads the book, a subtle sequence, rhythm, and repetition become apparent. Five illustrations (the first a color version of the one on the cloth sleeve, the others cross sections of abstracted organic segments) captioned with a continuous text are interrupted by intervening pages, “It’s understood / between us. / The measure of all things, / a few words worn around the edges, pressed into something soft / and made solid over time.” The book’s graphic components also include the use of drawn letterforms in addition to handset metal type. An urgency is expressed by these crowded and overlapping stencil like words that is released with the turning of the page into a more purely visual opening with little or no text. 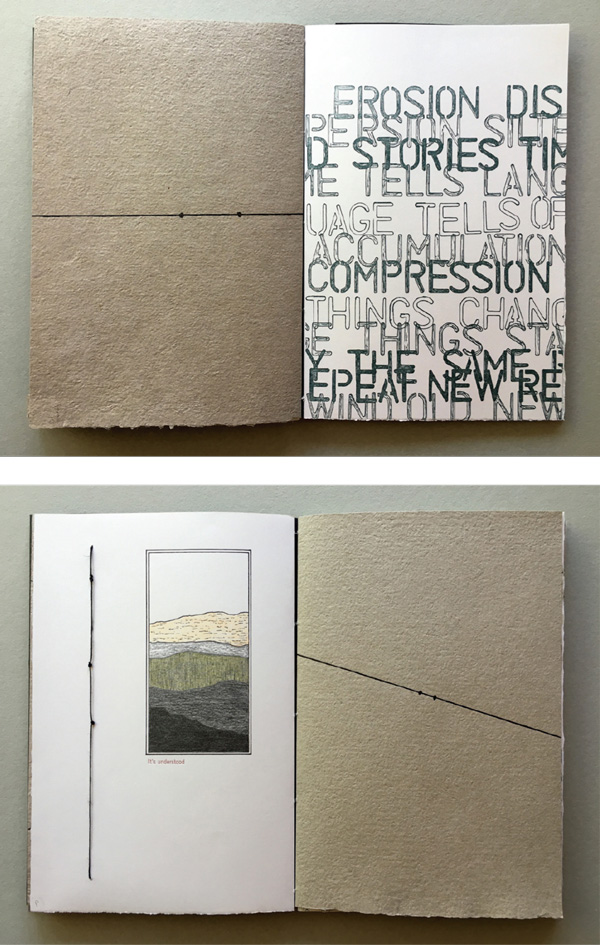 According to the artist, The Quickest Forever became a meditation on the passage of time, both geologic time and individual time. It also draws a connection to the book as a kind of geological artifact in itself. It is an object that represents the passage of time through the turning of pages, and within it our stories and narratives have accumulated over the centuries.

The Quickest Forever is imbued with a certain austerity and a quiet tactility, which reflect its subject matter and attention to geological and elemental aspects of a psychological topography. If the book as a whole is a meditation, then the turning of the pages is the act of breathing. The narrative expressed in the sequencing and repetition of word and image hearkens to the title: while one can experience this book quickly the impression is enduring. 