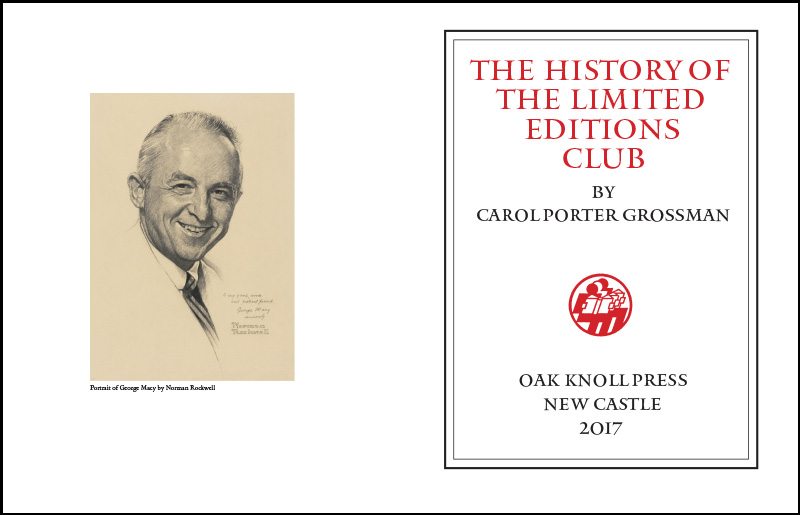 As the lucky owner of a complete set of every book published under the banner of the Limited Editions Club (LEC), I am not unbiased in my passion for its publications. I count Jeanne Shiff, the current owner, as a friend, and I had some good conversations with Carol Grossman about her book a couple of years back, which increased my expectations of this long awaited history. Nonetheless, it seems fair to say that all lovers of fine books will find themselves quite easily immersed in, and pleased with, this lively and knowledgeable work. The History of the Limited Editions Club is chock full of interesting and little known morsels about some of the greatest personages and works of twentieth-century fine book publishing – although I do not plan on giving them away: since Grossman did the research, she deserves your reading her work to enjoy them.

It is a testament to the successive owners George and Helen Macy, and later Sid Shiff, that they were able to surmount a constant stream of financial, artistic and personal obstacles to produce great works in conjunction with people like these. While undoubtedly there are private or fine presses deservedly credited with producing a small handful of books artistically greater than those created by the LEC, no other press comes close to the width and breadth of what the Club achieved, year in and year out, for 80 years. With nearly 600 titles, there are bound to be some misses in selection, design or execution. In fact, with such a large body of work, it is quite understandable that a proportion might be deemed average from the perspective of all fine press publications. Nonetheless, what is remarkable is not just the large number of outstanding works, eclipsing in quantity that from any other press, but the impressiveness of the totality, warts and all.

It is this totality that Grossman’s work allows us to comprehend. Any one work can have a seemingly unending list of challenges to surmount. Imagine managing scores of such projects simultaneously, during the Depression or World War Two, or during the decades when technology was quickly replacing older methods of production, leading to a dearth of the skilled workers required to produce such magnificent books in anything but very small quantities. All this with very little staff to help, and often while fighting ill health. Yet the LEC persevered and The History of the Limited Editions Club is the story of this success.

While the book is not overtly biographical, one gets to know the Macys and Sid Shiff intimately, and their personas are indistinguishable from the soul of the Club. As with any successful business, it starts with leadership, vision and an indomitable will to succeed. The reality of business as a key driver in artistic endeavours is often overlooked, but the Macys and Shiff understood that in order to meet their objective there was no getting away from running the LEC as a business. Interestingly, George Macy’s LEC (1929–56) would succeed only with tight budgets for each book and production runs generally of 1500, in order to stay affordable for their available market; whereas by Shiff’s time, beginning in 1978, the market had changed drastically, to the point where success could only come by inverting that model, producing much higher-priced books in much smaller editions. Each shaped the LEC to fit the realities of the markets he faced.

Grossman tells this story through the history of the production of the books themselves, initially covering each of the works of the first handful of yearly series, and then moving to a more broad set of overviews of later series. In fact, something over 70 per cent of the book is devoted to the Macy years, with about half the book devoted to the first decade of the Club. This makes sense, as it is the founding of the Club and the challenges of keeping it afloat during the Depression and World War Two which are of most interest, along with Shiff’s changing its raison d’être in order to save it.

For followers of the LEC, Macy has often been rather a mysterious figure: there was not much readily available information on his life. One heard tidbits about a hard-nosed business man with a temper, often butting heads with those he worked with. Grossman provides a much more comprehensive picture by researching the correspondence between Macy and the craftsmen he worked with. There is no question that Macy knows what he wants, and drives hard to get it, especially when it comes to maximising the quality of the books he is producing while keeping a tight rein on cost. Despite this focus, and apart from a few well-known conflicts, such as that with Edwin Grabhorn, Macy shows himself to be jocular, flexible, willing to listen and even quite caring, especially to the many artists and printers whom the LEC helped by providing work throughout the Depression. His purchase of and involvement with the Nonesuch Press is shown by Grossman to be more an act of altruism to save one of England’s greatest presses than for personal profit.

Macy shipped the first LEC book in 1929, in the same week that the stock market crashed. It was only a few months before this that he had hatched the idea of producing fine books on a subscription basis, using the best craftspeople to design, print and illustrate them. He quickly seeded the company with $40,000, gained from selling a 49 per cent interest in the LEC with the help of a friend on the stock exchange. His business model depended on guaranteed sales of 1500 books each month. By the second series, that was achieved. However, the worsening Depression and then the War made maintaining that objective nearly impossible. Book by book, month by month, Macy had to pull rabbits out of hats to keep the Club afloat.

The first book produced is a perfect example of the difficulties that were to keep Macy busy for more than two decades until his death. Gulliver’s Travels, with illustrations by Alexander King, was to be printed by Norman T A Munder. Misunderstandings about the meaning of de luxe caused a series of delays as Macy and Munder negotiated back and forth about paper, the size of the book, type size, materials and the page count, to lower the printing cost enough for Macy not to lose money. Munder ended up agreeing to do the book for $7250. A seemingly endless number of design changes followed: Munder was asked to set the text using an edition different from that which he had used to make his estimate, the illustrator went on a long trip to China, the chief pressman was ill for some days at a critical time, King failed to provide the maps for the endpapers until the last minute, and so on. In the end, the book just made the date Macy had promised the subscribers, a minor miracle. Munder sent Macy a final bill with over $1000 in extra charges which Macy refused to pay, saying he had never authorised the spending. Munder never did another book for the Club.

Stories of the interactions and problems with Edwin Grabhorn, as well as with Picasso and Matisse, are certainly entertaining and informative. However, these involved only three books. Most remarkable are the Herculean efforts Macy made personally – Grossman’s account of his 1933 trip to Moscow reads like a John le Carré novel. Others made major contributions – Frederic Warde’s work on the second (‘All-European’) series was astounding – but Macy’s very deep involvement in every aspect of the books stands out. Equally notable is his forging of deep and lasting personal and business relationships with the great majority of people he worked with. Grossman’s work in putting together this picture from a myriad of primary sources is outstanding.

It is pleasing to see a good account of the 12 years from 1956 to 1968, when Helen Macy ran LEC after George’s death. As Grossman says, ‘while Helen did not have her husband’s flair for the unusual or the large scale, she did a very good job of running the Club’.  When she took over, there were 50 to 60 books in the pipeline. She not only managed to complete most of those, but oversaw the creation of many more very worthwhile editions. Nonetheless, by the mid 1960s it was clear, as Leonard Baskin pointed out in a letter to David Glixon, that the LEC’s audience was ‘a product of what you purvey’, by which he meant that the LEC was not evolving with the times and that its books ‘had ceased to play any significant role in the history of the illustrated book in our time’. In addition, the changing cost structure of producing such books, and the lack of skilled craftspeople for making them, meant the LEC’s days in its first form were numbered.

The Club bounced between corporate owners throughout most of the 1970s, barely hanging on, producing competent but generally uninspiring works. Sid Shiff purchased it in 1978, saying ‘When the Club came up for sale, I had no intention of running it. I was just putting a deal together to save it because I thought it was a shame to let something that good go down.’ Yet both save it and run it he did. His financial expertise in rescuing it from mountains of debt, along with his choice of more modern works and collaboration with contemporary artists to produce high quality livres d’artistes in smaller editions, allowed the Club to survive another 30 years. Sid’s son Ben’s role in running production and design was certainly the third major reason for their success. As Grossman says, ‘Sid’s genius was in assembling the right group of people to create each of his books. He virtually travelled the world to find authors and artists who produced works of distinction and relevance.’ Shiff notably expanded the cultural reach of the Club, particularly in his fine collaborations with some of America’s greatest modern African-American writers and artists, such as Jacob Lawrence, Maya Angelou, Margaret Walker, Zora Neale Hurston and Faith Ringgold.

Quibbles about the book would include mention of some paragraphs that read like colophons, and the occasional abrupt transition between paragraphs. However, the book effectively paints a picture of two men and a Club that were to leave an indelible mark on the fine press world. The book is handsomely designed by Jerry Kelly. It is unfortunate that it is not given the full fine press treatment, but both Macy and Shiff would realise that the dollars are not there to make such a venture viable. Carol Grossman’s work fills a major gap, and does it very well.