Knud Rasmussen, the Greenlandic-Danish polar explorer, organised a literary expedition to the Arctic in the early twentieth century. Describing the experience of an Inuit song contest – the anticipatory bodies, the air thick with smoke from blubber lamps – he wrote: ‘From the very first, the tunes are riveting and carry us away … I can understand more clearly than ever, how difficult it is to take the songs of the Eskimos [sic] out of their own context. For the words of the songs are only part of the whole intended effect.’ Rasmussen knew that Inuit cultures had long passed on narratives through performance rather than anchoring them in paper and ink. Myths, histories and poems were spoken, recited or sung. It was not only due to the smoky dimness of the venues that Rasmussen found it difficult to record this rich literary tradition in his notebook. He later wrote that his own ‘neat written language and … sober orthography … couldn’t bestow sufficient form or force’ on the singers’ words (Eskimo Folk Tales, 1921). 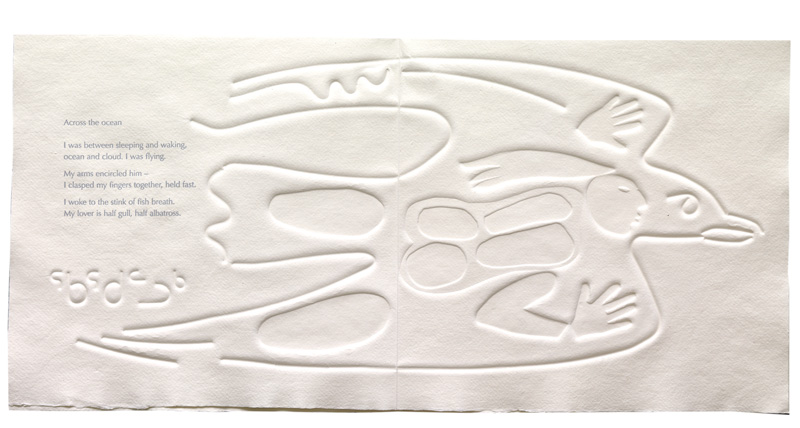 Subsequent translators of Rasmussen’s work echo his reservations. How to evoke the power and temporality of the original performance in a printed book? Later poets and storytellers face the additional challenge of being unable to go back to the true ‘original’. The process of creating new versions of these tales resembles the riverine twists of oral tradition itself: a story is passed on, and in the telling inevitably altered. Sedna and the Fulmar, then, arises from a tradition intensely engaged with the question of how best to tell stories, and what the listener might do with the words they are given. The book acknowledges that heritage by opening with a repeated act of speech, a reminder of how the story was once perpetuated: ‘She keeps saying No.’

Sedna’s tale is one of the most famous of those once transcribed by Rasmussen. It appears in different versions across the Arctic, and has become familiar in more southerly cultures through its representation in printmaking and sculpture too. In an environment to which the sea is of central importance – where the behaviour of the ice upon it is carefully observed and the wildlife it offers up for food is vital for survival – the deity of the sea is significant. In the version of Sedna’s story which Rasmussen recorded in Nunavut, a young woman rejects the uninspiring local suitors her father finds for her, but allows herself to be carried off by a mysterious stranger whom she discovers too late to be a cruel, shape-shifting sea bird – the broad-winged fulmar. She runs from this partnership too, and her father comes to her rescue – only to inflict on her the most gruesome rejection of all. Marked forever as an outsider in this culture which (even today) sets high value on belonging to kin or community, Sedna sinks to the sea’s bed. There the exile holds power over her former people: she is the origin of the sea mammals on which they depend for food and shelter. She keeps the sea in balance, and it is she whom shamans must propitiate when the environment is out of joint.

Ron King, the printer of this edition, has been fascinated by the Sedna story since first hearing it as a young man working in Canada. Now, decades later, with Arctic sea ice reaching record lows, sea mammal populations under threat, and increasing ocean pollution, it is time for King to summon Sedna in his own studio.

King’s first book, in 1966, was an edition of Chaucer’s Prologue to the Canterbury Tales, and it was followed by editions of bold screenprints illustrating Shakespeare’s works, including Macbeth and King Lear. He also has a track record of publishing new writing, drawing on a pool of poets that has included George Szirtes, Roy Fisher and Kenneth White. He is committed to publishing contemporary work, as well as reinterpreting the classics – and, in the case of Sedna and the Fulmar, does both. Richard Price’s minimalist yet lively voice has accompanied King’s artistic vision in a number of books now, and in these collaborations the pair seem as well matched aesthetically as Ted Hughes and Leonard Baskin. The narrative of Sedna is relayed by Price in a series of short poems, which pull no punches: ‘Since he grips his beloved fishing knife / between his teeth // he has the appearance of smiling.’

But the words, as Rasmussen wrote, are only part of the intended effect. It is necessary to find some way of conveying what is beyond language, and this is a challenge which King’s experience suits him for, and which is well suited to the artist’s book. In Sedna and the Fulmar, the heavy sheets of Khadi paper are not the base for an image, but rather become the image itself: these generous white expanses represent the air (across which sea birds wheel), the sea (through which whales and other mammals swim) and, of course, the ice. Against these three elemental Arctic settings, the action takes place, printed in blind relief and wire embossed. Those who know these regions will appreciate the wisdom of leaving the wider environment to the reader’s imagination, rather than replicating the exquisite images of icebergs which have become Sunday supplement clichés. The prints themselves dwell on the interplay of humans and animals, and are defined by shadows rather than tone. King relishes the strong silhouettes of shoals of fish, the smooth forms of seals and ship’s keels, the pattern of feathers on a fulmar’s wings … The flattened perspective and clear line recall the style of some Inuit printmakers, best known these days from the Cape Dorset Studio works popularised as stationery by Pomegranate, but are also very much King’s own.

The first printing presses were introduced to the Arctic in the late eighteenth century, the tools of missionaries or of colonial administrations. Thus began the transition from oral to written literatures, to ‘neat written language’. This history creates an ideological challenge for the printer, as the act of anchoring a text on paper is a reprise of the first vexed assertions of colonial power. King has never lost sight of the iconic possibilities of letterforms, nor an awareness of their influence. In the Alphabet Series he works entirely with cut and folded paper to create letters that leap from the bare page, casting dynamic shadows. The first appearance of an ‘ABC’ in his work was Scenes from the Alphabet in 1978, with Roy Fisher. He went on to make the iconic pop-out poster Alphabet I (1983), Alphabet Concertina (1983) and, most recently, little but often and the ‘A-G bestiary’ Going, Going… Gone! (2013), both with Richard Price. (In the last the exuberant letters introduce a series of seven animals on the verge of extinction or under threat, the consequence of other disappearing ecologies.) In Sedna and the Fulmar, a different wire-embossed Inuktitut word or phrase appears on each page spread. To most readers the meaning (and even the pronunciation) of the Inuktitut syllabics will be unfamiliar until the glossary is found on a small insert, which has the air of an afterthought: Sedna, Father, No!, Real man! Fulmar! Alone! Ready to Kill, Storm, Thrown overboard. The syllabic writing system has been used in Nunavut since its introduction by missionaries in the 1860s – the missionaries who would have discouraged belief in Sedna. Syllabics are therefore a relatively recent development in the history of the Inuktitut language. In isolation, as keys to each episode, these words provide an intriguing vocabulary lesson. Just how creative such a lesson can be was demonstrated by Mitiarjuk Nappaaluk, author of the ‘first Inuktitut novel’, Sanaaq. In the 1950s, a missionary asked Nappaaluk to write some sentences in Inuktitut so he could learn the language by seeing the words in context, rather than listed in a dictionary. Instead of offering him a series of unconnected examples, Nappaaluk built her sentences up to form a great web of stories explaining her culture. King, by contrast, employs the vocabulary to introduce a strangeness to the book, a third dimension alongside the poems and prints.

King’s work has always been notable for its playfulness, which often masks dark or visceral content. There is a wonderful openness to experiment with different processes and materials, from the bright screenprints in sharp pop-out forms to the wire-embossed books in which casts worm under the paper, creating an image that is experienced through light and shadow, and indeed touch. Wire embossing is used throughout Sedna and the Fulmar, and in the poem ‘Seduced’ a prone female figure recalls the images from Turn over Darling (1990), King’s earliest use of the technique. Turn over Darling hinged on recto becoming verso, and was as much about the act of reading, the dynamic between one page spread and the next, as looking at the female figure. The wire-embossed images in this latest book might recall the ajaraarnit, or figures of string, an advanced form of cat’s cradle played in some areas of the Arctic, in which a storyteller twists string around their fingers, knots and unknots it, creating complex patterns to illustrate a sequence of events in a story. At the end of the tale, the string is suddenly shaken out, becoming a single line once more. A particularly effective use of wire embossing occurs in the episode in which Sedna’s fingers are chopped off, one joint at a time, by her father when she tries to cling to the edge of his boat. Her hand occupies almost the whole page, and her fingers reach beyond its edge, the deckle edge of the paper becoming first the gunwale they cling to, and then the blade that slices them:

I hack down to the last joints
(with the fishing knife her mother once gave me) –
Whales bob up!

My daughter’s hands are just stumps.

And so Sedna’s hand turns over the page to become her amputated fingers that in turn transform into the animals of the sea. Price’s final poem is a reminder that the ‘subtle poet’ who visits Sedna must placate her by combing her hair – an action the amputee cannot perform herself. The reader’s hand is reaching out to the page too, just about to turn it, implicating themselves in her story.