This book is a biblio-memoir. As such it is a constant wrestle with the truth and the projection of the truth in a narrative that may contain lies in order to uphold the truth, or some such. We are frequently warned of this by the author. There is a quotation early in the book from Lawrence Durrell’s Balthazar stating: “We live by selected fictions.” Then there is punctuation at several intervals throughout the book where a fresh quote from the likes of Thomas Mann, Oscar Wilde, Oliver Sacks, and others say the same thing in different words. And then late in the book Ava Gardner is quoted from her The Secret Conversations where she reputedly said “It’s my fucking life. I’ll remember it the way I want to remember it.” And so we are duly warned about the truth thing and the in-your-face thing. In the light of what may for some turn out to be a bit of a bumpy ride, to say that the book is sometimes a little inaccurate in the fine details when it comes to people seems a bit lame given where Gabriel Rummonds is starting from. But so I have heard several knowledgeable people say (who said they had read the book). 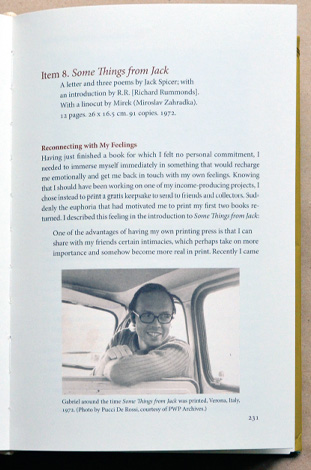 The book is copiously detailed in the descriptions of the projects undertaken by Rummonds’s Plain Wrapper Press. The narrative around the simple bibliographical facts and illustration adds a lot of value, regardless of the poetic license of a little embellishment from time to time. Churchill said of Russia that it was “a riddle, wrapped in a mystery, inside an enigma.” Based on this book, I feel a little that way about Gabriel Rummonds’s life and output. There is a constant tension to his life. Sometimes he seems (in his own recounting) overly critical of others even to the point of rudeness. But then he treats himself in a similar way, being harshly critical of himself. Out of context some of his remarks seem churlish and unkind, but then taken in the context of the flow of the narrative they seem less so.

Many of his titles appear ephemeral in their brevity and their subject matter; others give an impression of being founded in a high level of professional commercial judgment in their conception—not that even those would have been expected to make him any money. The life of the artisanal printer and publisher is not an easy one; Gabriel Rummonds was happy and fulfilled, but also anguished and trepidatious. This was particularly true concerning the business side and his early tussles mastering the technology. Ultimately the idea of being a private press printer provided him with a coat hanger on which to assemble and fashion his life. His publishing brought him into contact with a raft of interesting people, and a rich cultural backdrop that kept him busy for some 20 years. And it gave him an excuse to travel often; he’s had an interesting life.

There are a little over 40 titles described in detail, all with anecdotal stories attached. The publication dates range from 1966 to the mid-1980s. His most prolific year was 1972, with seven titles, although some projects published that year had been on the boil for a while. For me, the three highest-profile titles are the Seven Saxon Poems in 1974, a big, glamorous, and expensive book of poems by Jorge Luis Borges, with box and cover artworks by Arnoldo Pomodoro; then Anthony Burgess’s Will and Testament, illustrated by Joe Tilson, from 1977. The latter happened in part because of the enthusiasm of his customers for the Borges-Pomodoro book. My third is Before You Say Hello, published in 1985, with a text by Italo Calvino and woodcut illustrations by Antonio Frasconi.

Plain Wrapper Press books were mostly published in editions of between 75 and 140 copies. Several editions were smaller and the largest— a John Ruskin text published in Italian—numbered 400. Often part of the edition was given to collaborators to defray the costs, and as the titles appeared for the most part in Italy, they were sold to collectors there and, to some extent, elsewhere in Europe. Internationally, and in the U.S. especially, these titles are rare and unattainable by most collectors today. This scarcity adds to the mystique and works against a general knowledge of the good and worthwhile body of work that Plain Wrapper Press was responsible for. It was after the rollout of Will and Testament in 1979 that a review was published in Fine Print proclaiming Plain Wrapper Press books as the embodiment of Imperial Easter Egg ostentatiousness—an aspect of the tensions I noted above. But then Abe Lerner, a well-respected book designer from New York, wrote a response to the Fine Print article saying that all that could be asked from Plain Wrapper was that its books be beautiful and well made. That sounds OK to me! After all, these titles are created mostly for bibliophiles who have no trouble relating to the PWP idea. 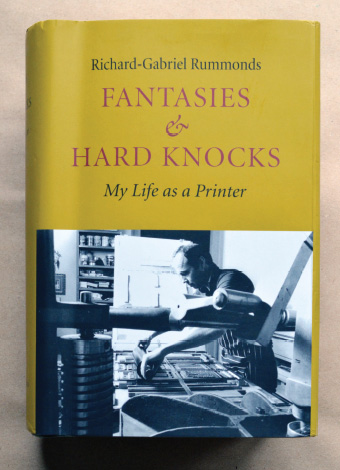 So what is this book? A detailed exposé of the work done by Gabriel Rummonds? A narrative of the life of the man, warts and all? A cookbook? (There are after all at least 65 recipes.) My reading is that it is all of these things, with a good measure of insistent gayness thrown in. I don’t really understand the cookbook part, which to me seems out of place, but insofar as it adds to the eccentricity of the project (probably an important component in molding it), and by inference, playing up the eccentricity of the protagonist, then so be it.

Over the weekend we ate a very good stuffed cabbage. I liked it because it had a nice fresh tomato sauce with a hint of sweetness, the cabbage was crunchily al dente, and the meat filling was finely milled and not overburdened with rice. There is a recipe for stuffed cabbage on page 87. It contains no rice, which is good, and quite a lot of seasoning (not so good). I read the recipe because I am reviewing this book and I had just eaten stuffed cabbage. Normally I would have turned the page and moved on.

This is a big and quite heavy book that retails for about $10 a pound, which is approximately one-thirtieth of what Jorge Luis Borges’ Seven Saxon Poems sold for in the Arnoldo Pomodoro box in 1974. On a page-by-page basis it is even better value: 813 pages versus 40. Alas, no Borges or Pomodoro association, no box, and none of the collectible scarcity, but nonetheless a great value.

The book is also well made. The ivory-colored wood-free paper has a nice look and feel and the mass of color illustrations (the book says a total of over 450) adds to the experience considerably. I also liked the book cloth choice and the quality of the gold stamping on the spine. All in all, a visual treat. There are some typographical errors, but given the length of the book, not so many, none terribly irritating, and hardly anyone will notice anyway. And so to the content which has some people returning their copy… I have spoken to a number of people who have read the book and to a person they say they read it from cover to cover. This is a comparatively unusual book, and a cover to cover read in our field I suspect is not a common thing. It comes across as a saga: a tale told over several evenings to an engaged group around a warm, comfortable fire, as it were, with occasional little side stories thrown in. These will be a page turner for some, and a turn off for some others. I was told by one bookseller (and I have only spoken to one) that he has had copies returned because of the salacious nature of some of the content. As a personal remark, I care less about the description of the sensual feel of soft woolen underwear on the way to a grope of pubic hair than I do about a rather bald description of Anthony Burgess’s bagman-like appearance in the streets of Verona. But in the case of this book I conclude: so what? Taken at large this book is entertaining and informative. I recommend it.