Nina Schneider, Pressed for Time, A descriptive bibliography of the work of Russell Maret Russell Maret, 2014.

I read recently a remark by the bookseller and writer Rick Gekoski that ‘doing bibliographic research is achingly dull and requires discipline’. Whether it is dull work might well depend upon your personality type; that it requires discipline is indisputable. But this is really only the first thing to be considered. The ‘problem’ of bibliography is that it is, to my mind, both an art and a science or, to put it another way, we sometimes want bibliographies to be both books to read and to refer to. Bibliographic science requires that there is a consistent, well explained and signposted, unambiguous methodology, as prescribed, for instance, by Fredson Bowers in Principles of Bibliographic Description (1949), or by the Anglo-American Cataloguing Rules, which have been the authoritative guide to library cataloguing for many decades. The result should be an unambiguous description not just of the copy in hand but of all copies, because variants from the norm will always be noted. If the methodology has been explained then we should be able to mentally picture the book.

That part of bibliography which I think of as an art lies in selection and in the choice of additional information that is not essential to the description of the books, but will interest the reader. This is especially valid and applicable in the case of private press books, where the printer’s motives, personality and characteristic style are nearly always of interest. In thinking about these matters, there are various models available to the private press bibliographer. To consider just a few. William Peterson’s account of the Kelmscott Press is strictly formal in its descriptions, but also includes invaluable additional information (he has written an engaging history of the Press in a separate work). Marianne Tidcombe’s impeccable bibliography of the Doves Press (2002) is preceded in the same volume by an illustrated history of the Press. The four volumes of Golden Cockerel Press bibliography (published 1943–76), although largely compiled by the printers themselves, are very short on useful detail, although this can sometimes be found elsewhere. This is not ideal, but the entries are interspersed with occasionally illuminating background comments on the circumstances of the books, and even on successes and failures. And this now seems to be the preferred model, as we have seen recently with the bibliographies (one should really say bibliographies and histories) of Stanbrook Abbey, Whittington and Rampant Lions, all of which are impeccable and fully detailed in methodology and enlivened by the printers’ own reminiscences – in well-judged doses. For myself, I want neither the tediously chatty nor the ludicrously detailed. An example of the latter is the 1995 catalogue of the Gregynog Press special bindings, which included, inter alia, ‘a systematic description of italicised letters, numbers and words’, without ever demonstrating that these have any significance.

Another possible example and model is the Ashendene Press Descriptive Bibliography (1935) which St John Hornby himself compiled. It has all the qualities of the man and the books themselves: discretion, patrician reticence, modesty and, in its production, all the best virtues of the Press itself. It is a little light in necessary detail and is not complete in regard to some ephemeral items, but it is not inaccurate (though there were two later errata slips) and is always engagingly discursive and readable. The methodology would not be appropriate for incunabula, but it is entirely suitable for this Press. One feels that Hornby wanted his Bibliography to be characteristic of an Ashendene book and achieved just that in what turned out to be one of his finest books. (Much more of the Press’s history can be found in Colin Franklin’s 1986 book The Ashendene Press – this volume also includes a much fuller listing of the Press’s announcements and lists and of the ‘Minima’, items not mentioned in the Bibliography.) Our own contemporary expectations are that a private press bibliography will include all the known ephemera. 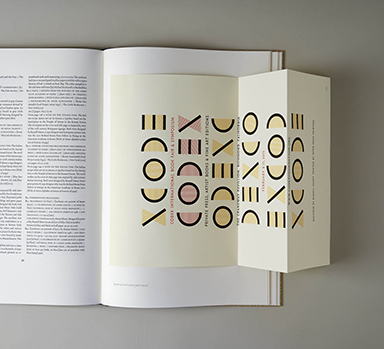 Russell Maret (hereafter RM) would seem to have a bibliography such as Ashendene’s in mind as his model for his own record of printing from 1990 to 2014. His Press’s history is complex, and so the record has had to be organised into more than one sequence. Section A lists published works, and is further subdivided according to whether they are monographs, broadsides or ephemera. Section B covers commissioned works, and is also subdivided. Section C covers authorship, criticism and biography. The entries have been compiled by Nina Schneider, and at various points there are notes (actually very long notes) by the printer himself. It does not matter that we finally reach A1.44f and B5.52 because the organisational principles are perfectly clear and well signposted. It is fully indexed.

The book itself is large (42.5 x 30 cm), which might strike some people as too large for a volume which, while undoubtedly a landmark RM publication, will also need to be utilitarian. It is generously illustrated with tipped-in plates, original printed examples, very exciting marginal illustrations and type designs (there is a reason why Karlgeorg Hoefer’s sensational Zebra type is printed in blue) and, above all, by Annie Schlechter’s photographs of the books, sometimes individually and sometimes in array. These are especially valuable as records of the highly elusive early books, which are shown to be imaginative and accomplished and freer of the self-doubt and questioning which RM describes in his notes. All in all it is a grand book, generously filled, tasteful in its range of colours, printed from photopolymer plates on fine Zerkall and French papers, and in a practical binding (quarter grey cloth, patterned paper over boards, slipcase).

The introductory essay by Mark Dimunation (Chief of Special Collections at the Library of Congress) describes his first meeting with RM in about 1999 (‘all poetic and tumbled’). What he particularly highlights, though, is the significance of the recent major books (Aethelwold Etc in 2009, followed by Specimens of Diverse Characters, 2011, and Interstices and Intersections, 2014), not just because they enjoyed well deserved success but also because they showed definitively that RM’s passion is for letterforms. This is something that RM himself dates to 1996 when he says ‘As of December 1, 1996, I was a printer who designed type.’ I cannot help thinking that letterforms should surely be the governing interest of all private press printers. It could be illustration or materials, but it is much more likely to be type. I leave the question of text aside as a separate matter.

Nina Schneider’s descriptions of the books meet high bibliographic standards, with full collations, binding notes and so forth. It might be thought that she contravenes the principle of bibliographic objectivity by printing all the colophons verbatim, although Hornby did the same in his Bibliography. There is no reason to doubt the accuracy of the information in them, and they are generally free of chatty cuteness – the ‘you are holding copy number …’ type of colophon – but it sometimes means that long lists of names of helpers are reproduced (18 in the case of Specimens). The reprinting of these full colophons as a shorthand way (not usually so short) of compiling the record would matter more if they were not additional to already full and complete entries.

The records in Section B for commissioned works are in a smaller type size (a question of space perhaps), and there is a discernible note of relief in RM’s comment that apart from occasional design work (particularly and brilliantly for Two Ponds Press) ‘I do almost no job printing’.

RM’s own essays (printed in his proprietory Cancellaresca Milanese to distinguish them from the catalogue entries, which are in his Gremolata) are instructive as to his methods, but also reveal his uncertainties, and let us see that his journey has been in his private, as much as in his working, life. It was only after his return from the West Coast to New York in 1993 that he printed what he calls ‘my first (published) book’ – he is referring to Meditation on Saviors (1994). He also notes 2007 as another significant year both personally and as a printer (Prometheus Bound).

This way of talking or reading about a printing life, and especially a contemporary printing life, raises interesting questions. Is the impersonal rationality of Doves Press typography or the highly personal and expressive artists’ books which are so numerous at the moment to be preferred? Do we respond more to technique than to text? Are we Apollonian or Dionysian in our tastes? Can there be too much of the printer’s personality in a book, or has that always been an essential and necessary part of the appeal of the private press? For myself, I think that the best books will outlive the personality of the maker, whether because of outstanding printing quality, textual significance, or illustrations. But in the meantime the character or ideology of the Press has an important role. It might be Cobden-Sanderson’s cosmic vision for Doves; Ashbee’s utopian ambition for a world in which creative work dignified the lives of men; the Roman Catholicism of St Dominic’s or Stanbrook Abbey. Sometimes, too, we are responding to a Press’s obscurity (the ways in which it is really a private press), the singularity of the pressman and his ideas, as with Gogmagog, or even to rarity and exclusivity.

Pressed for Time concludes with two appendices, the one giving the Press’s various locations and the other being Paul Gehl’s short essay on RM’s types. This is an essential part of the book, and is followed by eight leaves, on a different paper, of typefaces (all of them interpretations of historical models) and ornament specimens. It is essential because it takes us back to the heart of what matters to RM and what characterises his books. As Paul Gehl says ‘Many type designers claim to be interested in history; some really are. Rather fewer actually study it … to seek real understanding of letters as artworks embedded in time and place. Russell Maret is in this last class.’ This bibliography both describes and makes manifest that passion and talent for type and lettering. It is an important book both as record and example, stylish and sophisticated in appearance, bibliographically detailed and precise, crisply printed on fine materials and evidence of 25 years of exceptional achievement.

Special edition out of print. Ordinary edition, US$1,200.
www.russellmaret.com