Exhibitions of books seem to have proliferated in the last decade, and many of the best of them have resulted in published catalogues which allow those unable to see the works themselves to share in the richness on view. The 400-page Book Art Object, published by the Codex Foundation in 2008, which documented the exhibitors at the first of the CODEX International Book Fairs in Berkeley in 2007, might be seen as the most impressive of these catalogues. But catalogues generally have a more defined focus, such as the work of one press, or books of a certain kind: miniatures perhaps, illustrated books, or finely bound books. The Art of the Book in California has such a focus, displaying extensive examples of books from five of the leading presses in California. It also provides thoughtful contexts for the books themselves in the introductory essays by Robert Bringhurst and Peter Koch.

Interestingly, both writers mention Sandra Kirshenbaum’s belief that books do not thrive in museums, under glass, or in locked cabinets, but require an engagement with readers to become themselves. That they are in effect under glass when photographed in a book such as this is, of course, ironic, but it is a necessary irony which is countered by the excellent photography: many of Douglas Sandberg’s photographs show the tactility of the pages — the impression of the type, the tension in the curve of the sheet — to some sensual effect. Since I agree with Sandra Kirshenbaum’s point, I am struck by two opposing thoughts about this: first, how rewarding it is to see books so well represented visually, in contrast to the older books on books I have in my library which present dull black and white photographs, as misguided in their way as black and white photographs of Rothko’s paintings; second, how the image has come to predominate over words in our understanding of books. 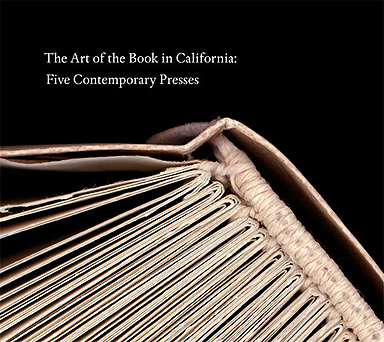 I know that some of the most evocative introductions to books for me have been in the purely verbal descriptions in the best booksellers’ catalogues: Roderick Brinckman’s Monk Bretton catalogues, for instance, or Bertram Rota’s seminal 1974 catalogue, ‘The Printer & the Artist.’ These were written beguilingly because their intention was to sell the books. The fact that words could so sensually represent the visual and tactile essence of a book as well as its content has always pleased me, and I still read such catalogues for pleasure, as I do bibliographies. This is not to say that photographs are nugatory — especially when they are as fine as those in The Art of the Book in California — but they are not as unfailingly accurate as fine descriptions can be. For example, here is Robert Bringhurst describing Carolee Campbell’s Ninja Press edition of W.S. Merwin’s The Real World of Manuel Córdova:

It is a poem about a river, printed as a river, so it becomes the map of a river, on paper that ripples like a river and is as richly colored as water gorged with red Amazonian mud. It is a river of words and a map of the mind, but it is also, first and last, a book, and so the sheet, 15 feet long, folds into something as compact as a Javanese or Tibetan sutra.

Certainly few, if any, booksellers’ catalogues would include so fine a description, and if this were part of the entry I dare say the book would not last long on the dealer’s shelf. The point is that, having read such a representation of the book’s qualities, a photograph is little more than an appendix. I don’t in any way mean to take away from the images in this catalogue, but to make the point that the place of the verbal, which is often seemingly subverted by the pure visuality of fine books, is something about which we need to be reminded. The Art of the Book in California is, in this way, more than welcome, since both the fine essays which open the book enunciate its purpose as having meaning, whether visual or verbal. They place these two impulses, which are often made to seem opposed, in collaboration. Bringhurst, having discussed both the textual strengths of the Grabhorns’ books and the visual integrity of Ansel Adams’ books of photographs, says that ‘. . . books turn out to be sequences that, by force of meaning, hold themselves together.’ And Peter Koch, speaking to the innate intelligence of the books represented, makes plain that ‘. . . [it] is . . . in the masterly complexity of these books that we find beauty and inspiration in valiant combat with a benumbed world oversaturated with information while at the same time drained of meaning.’ This seems to me to be the crux of the discussion, and the innate value of this book: that the distinction between information and meaning, whose relation is that of stones to a wall, or a dictionary to sentences, should be properly understood by those of us who make books, and so by extension to their readers. Whatever form a book may take, physical or digital, the necessary progression from its elements to its structure is to be celebrated. From that criterion, over and above the real beauty of the work, these five presses are justly to be celebrated.