Oscar Wilde. The Importance of Being Earnest. A Trivial Comedy for Serious People. North Vancouver, The Bowler Press, 2008. C$300. 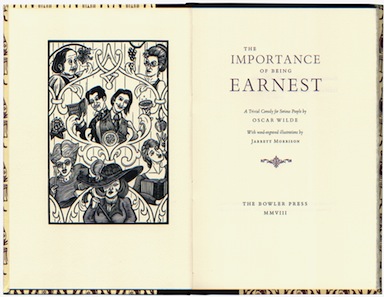 Oscar Wilde. The Importance of Being Earnest.The Bowler Press, 2008.

Our culture views comedy as unimportant, a place for relaxation after more serious things, effervescent, charming, and forgettable. Tragedy — now that’s important. That’s serious. We suppose seriousness to equal grimness of thought, bleakness of aspect, and an ironic view of humanity leavened only very occasionally by a wry and bitter smile. This is the ‘real world,’ after all. We are not children, needing to be laughing and happy; we are adults, who go to war and fall in love with the wrong people and deal in death and despair. But somewhere in this march from infantry to adultery we have — not necessarily individually, but as a society – lost the ingredient of proportion. We are no longer attuned to joy. Like the ladies who follow Bunthorne in Patience, we droop and yearn. We have stopped maturing and wallow in a state of self-aggrandizing intellectual adolescence.

One problem is that we no longer take language very seriously either. Farce and comedy, for example, are not at all the same thing, although they are often mistaken one for the other. Farce is what happens when plot is driven entirely by immediate situation, without recourse to character or context. Comedy is not necessarily funny, but farce always is — or it closes on opening night. The pointed quips and jibes of Oscar Wilde’s The Importance of Being Earnest are usually seen as farcical these days, for the play is as screamingly funny if it is well performed as it is psalmically dull if it is not. The play is read, produced, and taught as an example of the comedy of manners (manners also having almost disappeared) and so viewed as a cameo brooch or an ivory miniature — exquisite, but unreal. We laugh, and we forget it. I believe it needs another look.

It is true that Earnest is probably the most beautifully made play this side of Twelfth Night; it could certainly be argued that they are the two greatest comedies in the language. Its structure is (there is only one word) exquisite, although it took Wilde time: the first four-act version is almost as funny, but not nearly as good. Not a word is out of place, not a line too long or too short, not a moment dull. It occupies a place in the arts with works like Mozart’s Le Nozze di Figaro, Ashton’s La Fille mal Gardée, and Sargent’s Madame Gautreau. And Earnest is a comedy, not a farce: that is, it takes the broad view, and demonstrates some truths about the human, and particularly the social, condition which are unassailable. Like classical comedy, it also ends in marriages.

What sets the play apart from other great comedies is its ceaseless use of paradox and nonsense to keep the audience continually off-balance:

Algernon. I am obliged to go up on the first train on Monday morning. I have a business appointment that I am anxious to miss!
Cecily. Couldn’t you miss it anywhere but in London?
Algernon. No: the appointment is in London.

While registering what has just been said, one discovers one’s attitude toward the speaker to have shifted yet again, so that every character is viewed as if through a crystal chandelier, fragmented and iridescent, but always moving from completion to completion. Although it proceeds inexorably (although that is far too dire a word) to its conclusion, the play is comprised, like a ballet, of a series of exquisite variations. 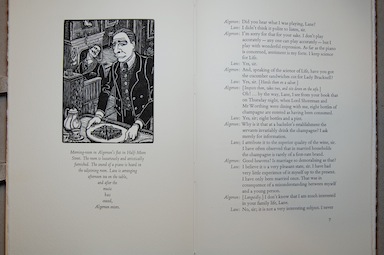 Oscar Wilde. The Importance of Being Earnest.The Bowler Press, 2008. The wood-engravings by Jarrett Morrison combine the slightly edgy quality of a Linda Barry with the black-line directness of woodcuts. 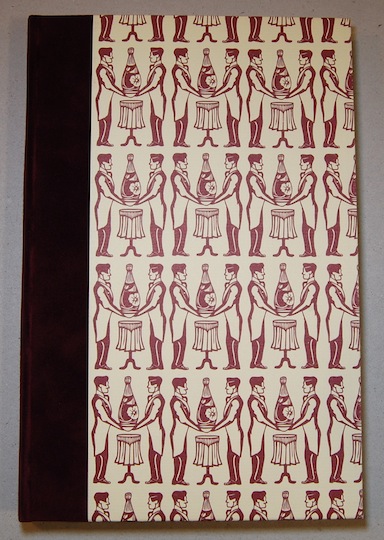 The binding is quarter plum velvet, gold-stamped, with delightful decorative papers showing a repeat pattern of two waiters carrying a very large bottle of champagne which appears to contain (fine touch!) a lily.

It is odd that The Importance of Being Earnest has waited until now, as far as I can gather, to be published in a private press edition. We can therefore be all the more grateful that it was Jarrett Morrison at the Bowler Press who has published it, because it represents a perfectly-realized reading of the play in print. It is set in Bembo with Fairbanks as the companion italic (always the best choice, to my eye) and printed on a pleasingly soft Somerset Book Wove. The pages are laid out with generous margins. The speakers’ names are run ragged left to give the spoken text a firm left margin and a slightly narrower measure than the 6 by 9-inch page would normally demand. This makes for fleet reading; it carries the reader along at a fluid rate, but not a breakneck one.

The binding is quarter plum velvet, gold-stamped, with delightful decorative papers showing a repeat pattern of two waiters carrying a very large bottle of champagne which appears to contain (fine touch!) a lily.

There are two things which are even more remarkable than all this. The illustrations, wood engravings by Mr Morrison, combine the slightly edgy quality of a Linda Barry with the black-line directness of woodcuts. Moreover, they do not illustrate the high points. In fact they rarely illustrate the action at all, but comment obliquely on the play’s relationships. For example, in the scene when Lady Bracknell is interrogating Mr Worthing, the illustration shows the adult Worthing in top hat, wrapped in bands on a porter’s dolly with a label marked ‘Worthing,’ being wheeled past Gwendolen and Lady Bracknell on a station platform — probably occasioning comment. An earlier engraving at the opening of Act I shows Algernon playing the piano and looking remarkably like James McNeill Whistler — one of the few people who ever bettered Wilde in a duel of wits.

The other remarkable thing is that this is Mr Morrison’s first book. It is astoundingly accomplished, and at C$300 must count as one of the bargains of the decade in fine press printing. Very few such opportunities present themselves — not even for ready money.

Crispin Elstead is the Co-proprietor of Barbarian Press in Mission, British Columbia.