As a child I played with an antique deck of chromolithographed cards, which depicted not hearts, clubs, spades and diamonds, but whimsical landscapes. One showed the ruins of a magnificent medieval fortress. Another, boats on a lake bordered by palm trees. Others, sublime mountain ranges. There was always a road in the foreground, along which a pair of horses drew a carriage. These views were not self-contained vignettes: each card could be joined to any of the others, because the road reached the edges at the same point on every one. However unpredictable the inclines and settlements at the centre of each image, the highway never deviated. Aligning these extravagant geographies, I made a cardboard continent. The passengers in the little carriage can scarcely have felt a jolt as they crossed from Alpine pass to desert dune; although they travelled far, they never had to fear tumbling over a precipice or reaching a closed border, for there was always a card in my hand, ready to lay down to prevent their vehicle rolling into annihilation. And, sure enough, there the carriage was, pictured on the next card.

I remembered the Victorian game years later, during a winter on the north-west coast of Greenland. Although the icescapes that surrounded me had been absent from the myriorama, they were shifting and changing in the way the cards had done. The island of Upernavik lies at latitude 72º North, and its small museum can claim to be the most northern in the world. In winter 2010 I was invited to create a work in response to the museum collections and the life of the island community. Before travelling I spoke to a number of artists and writers who had embarked on similar residencies in the Arctic, including the designer bookbinder Tracey Rowledge. All admitted the challenge of responding to the polar environment, the pathos of its rapid disappearance. My own response would bring together two ongoing concerns in my work, the arts of the book and poetics – and begin a decade of work on ice and artifice.

As the sun returned and hours of daylight grew longer, I watched icebergs from my studio window, forming protean mountain ranges on Baffin Bay. The Arctic landscape is forged from water. Glaciers advance, churning a path through basalt cliffs, and thunder into the ocean. Ice creeps across the bay, extending the island’s shoreline by a mile and more, only to vanish on stormy nights. The museum had a modest collection of historic artifacts such as whaling logbooks and rusted harpoon heads. Rather than study these relics, the curator encouraged me to go out and meet members of the community who knew the present condition of the waters surrounding the island. They explained that the ice, always mutable, was becoming dangerously unpredictable. Even the elders, most adept at interpreting ice patterns, were no longer sure where to step to avoid falling into the freezing water. An old way of life was coming to an end.

My conversations over coffee with the hunters reflected how stories had always been passed on in Greenland, an oral literature of song and storytelling; written records begin with the arrival of Danish missionaries during the eighteenth century. While asserting sovereignty over the land and establishing Danish as the language of administration, the colonisers set down Greenlandic in the Latin alphabet. Greenlandic (or Kalaallisut) is caught between cultures, an Eskimo-Aleut language that is not written with the Inuktitut syllabary. Greenlandic words inhabit the orthography restlessly, and letterforms and spelling were still being debated at the start of the twentieth century. This demonstration of an alphabet as a fairly random system of representing sound intrigued me.

I began to learn Greenlandic. It is a polysynthetic language that allows the creation of long words by stringing together roots and suffixes. A single word can express concepts that other languages would tiptoe around with a phrase. I was delighted to discover terms which revealed the working of the culture to me, like orsuarlerpaa: ‘to pour oil on water in order to see what lies in the depths’. The wide vocabulary for environmental conditions enshrines traditional knowledge which is fundamental to understanding Arctic ecology. I had many patient and willing teachers on the island, in addition to which I consulted an old Greenlandic–English dictionary in the museum. The bowdlerised English definitions puzzled me, and several corrections in a shaky italic hand suggested that the dictionary was fallible. It was one of the few books on the island, and had been printed in Copenhagen. In between studying the long words, I looked out at the view of icebergs for relief. I began to see the peaks and tables on the linear horizon as a type of arcane writing. Topography seemed the best typography for a culture that was resistant to words on paper.

The printing press had been introduced by missionaries during the late eighteenth century. Greenland’s first printer, Jesper Brodersen, was a shadowy figure whose total known output is a pamphlet dated 1793. Dr Hans Rink, the factor for South Greenland, was concerned about Greenlandic culture under Danish rule, and acquired Brodersen’s press in 1855. Initially Rink published ephemera like his predecessor, but as his confidence grew, he began to dream of more significant publications. With a new press imported from Copenhagen in 1857, he produced the first book printed in Greenlandic, Pok, which describes the journey of Pok and Qiperok to Copenhagen in 1724. He was encouraged to publish more Greenlandic material, and in 1861 founded the national newspaper, Atuagagdliutit. Since the official administration of the country was conducted in Danish, the act of printing in the Greenlandic language was a huge step towards preserving national identity. 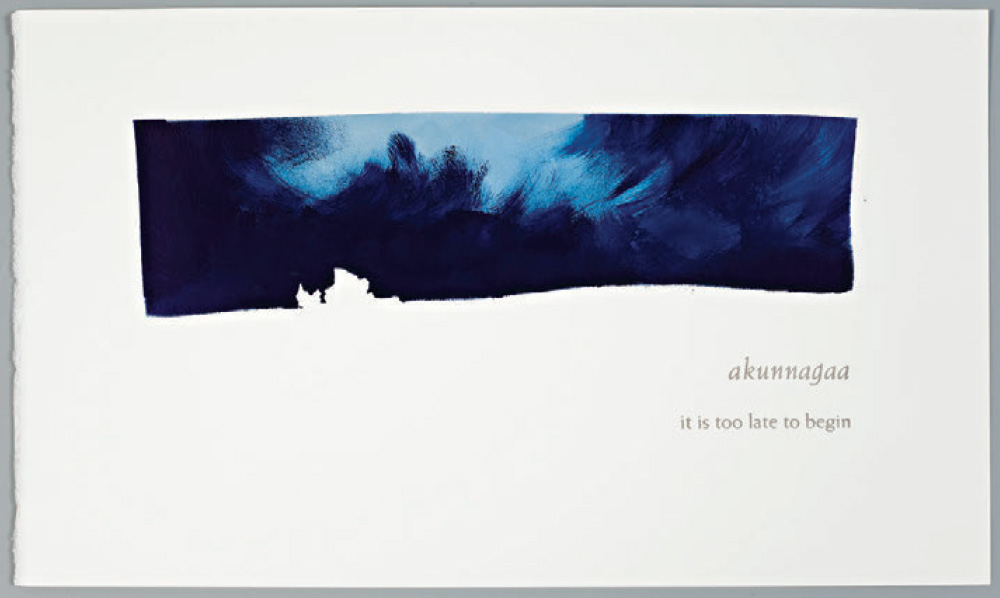 Today, Greenland strives to maintain its cultural integrity under the pressures of global commerce and environmental change. Greenland achieved a degree of political autonomy with the establishment of Self Rule in 2009, and once again Greenlandic became the official language. But government recognition does not guarantee survival. In the same year, the United Nations culture agency designated Kalaallisut ‘vulnerable’ and predicted that Avanersuaq and Tunumiit oraasiat, the North and East Greenlandic dialects, would disappear within a century, adding them to a world map of endangered languages.

On learning this history, I realised that language would be key to my representation of Upernavik, and I planned to make a work that would be accessible in both Greenlandic and English. I studied the dictionary, and began to select words for inclusion in an alphabet book, a form which would reflect not only my experience in learning Greenlandic, but also provide an introduction to the language for others. I’d wanted to print an alphabet book since I first began working with letterpress. The abecedarium structure offers fascinating possibilities for formal play and variation, as demonstrated by the celebrated pop-up Alphabet concertinas of Circle Press or – another book with an extinction theme – Ron King’s recent Going, Going… Gone! (2013, text by Richard Price) which is described as an ‘A to G’. The typical ‘ABC’ doesn’t really apply to Greenlandic either, as the alphabet contains 18 letters, only 12 of which are ever used at the beginning of words. Greenlandic primers could be described as ABDs.

The title How to Say ‘I Love You’ in Greenlandic came from one of the first verbs I had been taught, one of the easiest words to pronounce – if not always to say. I selected 12 verbs, which would present a romantic narrative in 12 micro-chapters as well as a lesson in linguistics. As in contemporary Arctic life, the fates of the characters are entwined with the environment, and the denouement is caused by the disappearance of the ice. I include words that refer to both the environment and the human emotions, such as imiivoq, which can mean ‘he calls out for joy’ but also ‘water is drawn from the shore by the ebb of the tide’. I began with the word akunnagaa or ‘it is too late to begin’, a fear that haunts the debate on climate crisis.

The Greenlandic words and their English definitions are accompanied by illustrations of icebergs. The structure of an alphabet book – one letter to each page – is simple. I kept the images minimal too, to reflect my visual impressions of the Arctic: fragments, equivocal silhouettes and occasional spots of colour against the snow. I had travelled up the coast from Kangerlussuaq in a series of small planes, seeing irregular tessellations of ice floes on the dark sea below. I was influenced by seeing the drawings of coastlines once used by sailors to aid navigation, but I also intended the outline of the ice to suggest a sonograph. The solid blocks of colour in the illustrations were influenced by the mood each word evokes, and informed by local architecture (wooden houses painted bright primary colours), dress (children’s gaudy gloves and hats) and weather (the violent skies at dusk or dawn or in the midst of a storm).

With no print studio on the island, I wondered whether to edition the images using screenprint or perhaps lino on my return to the UK. However, I felt the saturated colour of the former would appear too slick, and the latter seemed unfeasible for the scale I wanted to work at. The images ought to be grainy, but still rich in tone, evoking the way the horizon can blur and shimmer as a gust of wind blows over snow. I settled on pochoir, a process I had not worked with before. It might seem ironic to use an illustration technique associated with 1920s Parisian fashion plates to depict the austere Arctic environment, but the brushstrokes and even the gouache lent a sympathetic texture to the illustrations. Although it may seem folly to embark on such an experiment, thousands of miles from friendly advice and technical resources, the process turned out to be ideal for use outside a formal studio space. Pochoir, like a polar expedition, requires above all space and good organisation.

I’d put everything I owned in storage before travelling to the Arctic. When I returned I needed to print the text and Richard Lawrence kindly let me use the Vandercook in his Hurst Street studio in Oxford. His premises were still under construction at the time, and the building had a tarpaulin for a roof, but that didn’t worry me. I’d read of the trials that early Greenlandic printers had suffered during the winter, in ill-equipped printing offices, as extreme atmospheric conditions spoiled the ink (made from a concoction of varnish and soot) and the water in the dampened paper froze. I know about shipboard newspapers, printed in even more challenging and extremely cramped circumstances, a task often set by officers to occupy sailors on long polar expeditions. After the long months of wandering, the book of few words was completed within a stone’s throw of the Bodleian Library. Natasha Herman, of Red Bone Bindery in Canada, whom I had met while I was an apprentice at Barbarian Press, designed an elegant chemise and slipcase for the edition using blue Kitakata papers.

For me, learning Greenlandic was a radical but essential step towards loving and understanding my subject matter. Only then could I begin to see the questions I needed to ask. Can the environment survive without the language? Can the language survive without the environment? What does a person schooled in the printed book learn from an oral literature? A book of 12 words is only a short introduction to a whole language, but a few cards create a winning hand for those with the courage to play them.

A few copies are still available at £450.