Artists’ books have been described as narrative environments where an ensemble of performers, including the reader, come together–in the words of Johanna Drucker–to enact “a set of aesthetic functions, cultural operations, formal conceptions, and metaphysical spaces.” Indeed, the most successful of them will function on many of these levels simultaneously. This conception obviously rests on an enhanced understanding of the act of constructing a book as well as of reading it, and it recognizes–and celebrates–the multivalent collaborative and performative elements of the genre.

A brilliant example of the richness that can be found in this genre of collaborative ecosystems is In Visible Cities, the new project from Edition Reese. Taken on formal and visual terms alone, it’s a gorgeous object, worked to the fine level of finish that has always characterized Edition Reese and Turkey Press, and satisfying enough to need no further justification. But like any successful artists’ book, it reveals hidden layers of complexity as the reader burrows in. The primary “image/text” (as W.J.T. Mitchell would describe it) proceeds from Italo Calvino’s eponymous ruminations on socialized urban spaces. For this project, however, the algorist and artist Jean-Pierre Hébert distilled and poeticized a selection of Calvino’s narratives. In collaboration with Harry and Sandra Reese, his distillations were then refigured typographically (a la Ilia Zdanevich) and hung on a mesostic, a poetic device like an acrostic but with the vertical phrase in the middle, as famously employed by John Cage. Finally, the mesostics were set within Hébert’s series of galactic (or molecular? or musical?) visualizations.

These “computational drawings” are astonishing, the more so for being generated not by Hébert’s hand but by his brain. That is, Hébert has written original computer code–as if composing a score or choreographing a dance–based on his redacted Calvino texts. The code was then run, or “played,” on an inkjet printer, resulting in dynamic data landscapes that chart both the semantic and the social relationships found in the text. In effect, Hébert is proposing nothing less than a new approach to drawing, one grounded in “the conviction that to gain power and beauty, drawing should become a pure mental activity, rather than a mere gestural skill.” In other words, he rejects physical manipulation in favor of intellectual abstraction and a radically different semiotic system. “Drawing is just a thought,” Hébert says, and to enact it he brings into play the language of code. He has written of this process that he is “pursuing an ideal of beauty and ideal Platonic forms, inspired by my interests in patterns of geometry, mathematics, physics, nature.” These interests owe much to the theories of fluid dynamics, waves and instabilities, nonlinear dynamical systems, and data visualization espoused by the astrophysicist Juri Toomre. 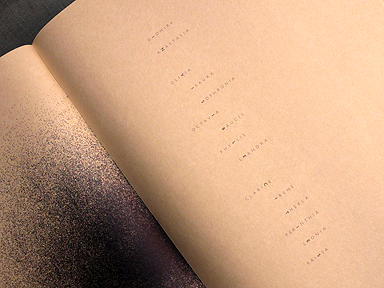 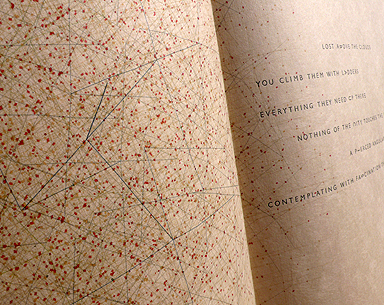 It’s hard to know who or what is the main creative force in this extraordinary artists’ book. Jean-Pierre Hébert, who works in “code and pigment on paper”? Bibliotects Harry and Sandra Reese? Iliazd, who inspired the typographic design? Calvino or Cage? These, of course, are the collective candidates, and it is with them that we are invited to join. What will we experience, what can we learn? Perhaps it is the realization that every single feature of this dazzling work pays homage to code, indeed is code of one kind or another. In Visible Cities points toward the zone of “poetic science” (as Dan Kelm, another book arts visionary, might describe it), where art and science, as well as myriad cultural and material practices, come to inhabit the same imaginative space.

To sum up, the straightforward and approachable beauty of this work belies the intricacy and magnificence of its overall conceptual framework. It is especially pleasing to see letterpress at work alongside inkjet, strange bedfellows though they are, but seemingly at ease with each other in this context. This is surely not the first artists’ book in which print and digital media interpenetrate, an honor that might best be claimed by Vincent FitzGerald’s 1996 edition of Divan-e Šhams, in which Bernard Kirschenbaum’s exquisite plotter drawings appear. Still, how exciting to experience a work that takes us farther along that path, opening a door onto the emerging field of code studies, where the making of code finds its place among the types of creative activities–like composing, drawing, and writing–that define us as human.

Code is text. It is an aesthetic object and a cultural resource. Code links people to devices, to books as well as computers. With this important project Edition Reese not only remaps the book but also redefines reading.