Do we pick a book for its author or its subject? I have almost never bought a book because it was written by Harry Carter, but I find, looking over covers and title pages, that I own many. He crops up discreetly — as second author on a title page, or assistant to the author, or contributor to an appendix. Then suddenly, late in life, he comes into his own as author proper.

When we acknowledge the typographic authorities of the twentieth century, we are apt to place Carter down on the list, owing to his own diffidence. Unlike Stanley Morison, Carter shunned the limelight. Once, we are told in Harry Carter: Typographer, when posters were printed advertising his Lyell lectures at Oxford, he objected to his name being in the largest type: In the relative prominence given to me and the subject and the series I feel I have been treated as a prima donna.’ Would Morison have complained so?

Authors Thomas, Lane, and Rogers have produced a modest work on a modest man — “not a biography but a biographical sketch”; with a bibliography “lacking full physical descriptions of each item [yet] complete within the criteria we have set ourselves.” 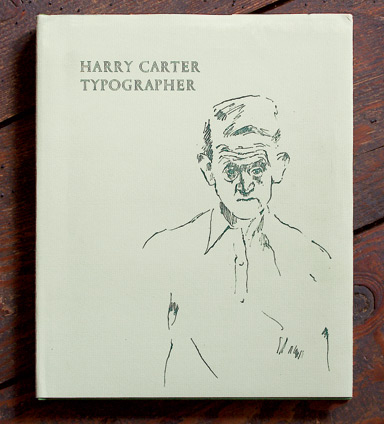 The father of type designer Matthew Carter, Harry was born in 1901 and educated at a progressive school — one which concentrated on practical abilities as well as classical learning — before going on to Oxford where he became competent in French, German, Spanish, and Russian. (He would later learn Arabic and design a fount of Hebrew.) Like W.S. Gilbert, T. Cobden-Sanderson and other creatives, Carter began his professional life as a lawyer before moving on to more sympathetic occupations. In 1928, he gave up law to go work and learn at the Monotype Corporation. He already owned a press, and had begun typographical researches and writing.

Around this time important friendships were formed with the likes of Van Krimpen, Morison, Meynell, and Oliver and Herbert Simon. (At school Carter had become friends with the Simons’ cousin, John Rothenstein.) Carter was involved with the Curwen Press and worked briefly for the Kynoch Press after leaving Monotype. In 1930 he published his translation of Fournier’s Manuel Typographique in which he criticized Monotype’s version of Fournier, inviting a defensive attack from Morison, then typographic advisor at the corporation. In 1931 Carter and Herbert Simon published the now scarce Printing Explained “. . . a thoroughly practical guide to the craft of printing, and one that can be recommended without hesitation to modern amateurs of letterpress.” From 1936 to 1938 he worked for the Nonesuch Press as Meynell’s inspired book designer, responsible for (among other projects) the twenty-four-volume Dickens.

Wartime saw him in the Middle East, and afterwards he spent some years working at Her Majesty’s Stationery Office, again under Meynell. The self-promoting tendencies of his compeers surely contributed to Carter’s comparative lack of professional recognition. From time to time Meynell or Morison would be asked to provide an assessment of Carter for a prospective employer. Both men generously noted his talents while worrying over his professional fickleness — a tendency to change his employers or his goals. On Carter’s leaving the Nonesuch Press just before the Second World War, Morison wrote:

[Carter] is versatile and able, but it seems to me that he has never made up his mind to be absolutely thorough in the exercise of any one of his many talents, with the consequence that from an employer’s point of view he is somewhat detached and inconstant.

Of his work at HMSO, Meynell summed up:

His talent for acquiring new techniques is perhaps a cause, perhaps a symptom, of a certain malaise — a kind of pessimism which he, of all men, could afford to be without. . . . Harry Carter left HMSO after eight years of almost solitary service there “escaped” was the sad word he used to me. He had achieved as much as any one man could in that time.

In his autobiography Meynell described Harry as “my None-such understudy; sometimes indeed my overstudy.”

In 1953 Morison wrote to Charles Batey, OUP printer, assessing Carter for a position at the university:

H.C. possesses a combination of talent that, without any exaggeration, ranks as unique in the English trade. At least I know of nobody else in this country who is comparable with Van Krimpen and Conrad Bauer for knowledge of type design and type production, and with the history of these techniques and associated crafts; also he possesses a wide knowledge of processes.

A final word to Morison who wrote to Van Krimpen regarding some notes on Fell he (Morison) had written and passed on to Carter (presumably for the latter’s assessment):

Those notes were intended for correction. I know I extended my behind in the direction of H. Carter’s toecap & he will surely place a good kick.

Carter was hired by Oxford University Press in 1954 and by then had certainly outgrown his changeableness, as he remained there for sixteen years. He was archivist and assistant to Morison as he worked on his great Fell book. In fact by the time the book was published in 1967 Morison was willing to acknowledge Carter as its principal author, but on the title page he is listed as having provided assistance to Morison.

In this period too there were other grand accomplishments. His extensive cataloguing of the many thousands of punches, matrices and founts at the Plantin-Moretus museum was described by G. W. Ovink:

[H]e displayed an uncanny ability to distinguish between copies and faulty castings, corruptions or bad impressions of the original. It seemed as if he could recognize almost any type of that period at first glance or after only a few moments of scrutiny. . . .

There were his Lyell lectures of 1968, published by the Clarendon Press as An Over-all View of Early Typography. Some of his endeavours were so extensive they could not be treated in this biographical sketch; one such is his decades-long involvement with Charles Enschedé’s Typefoundries in the Netherlands described by Martyn Thomas in Matrix 24. Thomas, Lane, and Rogers, with designer and publisher Martyn Ould, have given us a fit memorial to “one of the least-known best-known men in the world of books.”