Aldus Manutius’ edition of Francesco Colonna’s Hypnerotomachia Poliphili, published in Venice in 1499, is a book which is admired and coveted almost entirely for its appearance. Most of the collectors who lust after it and the librarians who are its guardians couldn’t begin to tell you what it is about. There are three good reasons for this. First, the book itself was the masterpiece of Aldus Manutius: as a printed object, a piece of design, and a combination of type, paper, margins, illustrations and visual development, it is unquestionably one of the greatest glories of the printed word. In consequence most viewers of the book remain viewers, and never become readers. Second, even if an admirer of the book were inclined to read it, the language in which it is written is renaissance Italian with a heavily Latinized and extraordinarily sesquipedalian vocabulary, requiring a reader fluent in both languages to make much of its text. And third, Francesco Colonna, an obscure monk whose life seems to have been devoted to an aestheticism as unabashed as it was fleshly, has written a dream-allegory: in our time, when our schools and universities have rendered most people incapable of recognizing its referents, allegory is practically unknown. Dreams, moreover, have become so asphyxiated by flatulent Freudian platitudes that their literary uses are virtually nil. 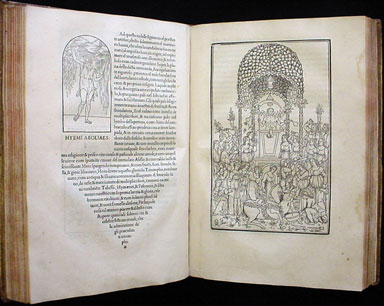 In 1999, in a quixotic and chivalrous move which might be seen by some as a thumbing of the nose at the age of the computer, Thames & Hudson published a quasi-facsimile of this book to mark the 500th anniversary of the original. In fact, this edition is a recognition and reminder of the book’s place in the history of the printed word. It is the first complete translation of Hypnerotomachia Poliphili into English, and if anything proves the recondite character of this text, it is the fact that it has taken 500 years for such a translation to appear. There was a partial translation (less than half the book’s length) in 1592, and there followed thereafter a long and disappointing silence. The French, ever randy for obsessive sensibility, have been served with two translations, one in 1546, the other as recently as 1883. The best scholarly work has been done in Italian (not surprisingly) and in German (inevitably).

Even had there been many translations, it must be said that the book would never have become a fixture of the family bookshelf. The movie rights remain unsought after. Moreover, the title does not spring easily to the lips. Over the years I have written down in a notebook nearly a dozen attempts at it by various people: Hippopotamus Philactor … Hypnotist Peripherals … Hippocanthippus Philippic …, and I once overheard a graduate student in English refer to it as “Halitosis Peony , the greatest incunabulous of the thirteenth century.” All of which suggests that the reason this book has never become a household word is that, if it were, no one would be able to ask for it, let alone know what it was when it was produced.

Hypnerotomachia Poliphili — the title is translated as ‘The Strife of Love in a Dream’ — is an allegory of love in the form of a huge erotic dream in which Poliphilo, the protagonist and lover of Polia, struggles with his passions in his efforts to win her. Even the name ‘Poliphilo’ could be translated as ‘the lover of many [things]’, and the substance of the dream is an allegorical and symbolic rendering of his passions in their reaction to ancient statuary, architecture, gardens, inscriptions, jewellery, music, pageantry and so on, ad — almost — nauseam. There are descriptions of temples, of fountains, of rituals — the Sacrifice to Priapus is typical — in which the love of beauty for itself transcends any attempt to define, rationalize or understand it. The book is as much a paean to the ancient world and its virtues (as opposed to the ‘values’ which have replaced them) as it is a quest for love, but the virtues remain implicit. Indeed, the ardour with which Poliphilo speaks of the works of the hand lifts him to an ecstasy beyond the erotic. His oddly touristic pursuit of Polia leads her finally to change her allegiance from Diana, the chaste huntress, to the gods of Poliphilo’s idolatry, Cupid and Venus, and at that point he wins her and wakes – to discover that he has lost her after all. This has, indeed, all been a dream.

As Joscelyn Godwin says in his excellent introduction, there is a fin-de-siècle quality to this story which makes its excesses both of language and feeling reminiscent of the works of Beardsley and Wilde.  He points out that “it is obvious from Beardsley’s drawings … that he knew and loved the Hypnerotomachia”. This is not necessarily a drawback. First published in the fin-de-siècle of the 15th century, and now reprinted at the end of the 20th, the book has an over-ripeness which counteracts to a degree the cramped and scrawny sensibilities of the 1990s. The text reminds me slightly of the writings of Frederick Rolfe, Baron Corvo; it is hard to read the famous passage on the Papal conclave from Corvo’s Hadrian VII (his one readable book) without sensing the shade of Francesco Colonna looming in the background. On the other hand, in its fascination with the ornamental, and its lack of concentration toward any very weighty theme, Colonna’s book is perhaps even more reminiscent of the shotgun pseudo-scholarship of the late twentieth century in books like Zen and the Art of Motorcycle Maintenance and Gödel, Escher, Bach: The Eternal Golden Braid, in which quantum physics and poetry copulate furiously with strict counterpoint and optics to produce a progeny astonishingly close to the computer potato of our day, all nerves, neuroses, and crackpot learning. That such intellectual back-combing was clearly as prevalent 500 years ago as it is today adds to the book’s fascination as cultural history.

I have spent most of this review on the text, assuming that most people who buy the book will look at it without reading it. But I suggest that we may learn from Colonna something about the thinking of his time which is different and more demotic than what we will learn from his great contemporaries — Michelangelo, Erasmus, Josquin, Villon, Dunbar, Leonardo — all of whom subsumed their age in their genius, in whatever form. The Thames & Hudson ‘facsimile’ is a re-rendering of a great work, and it is a fine one. The translated pages are set as nearly as possible to the setting of the original Italian text, using Poliphilus, the type the Monotype Corporation created from the original which Griffo cut for Aldus’ use in this book. The format is folio, handsomely bound; the paper is heavy and luxurious. Apart from their being in English, the pages look eerily close to the original, and it is to the original Aldine edition that this Thames and Hudson ‘facsimile’ continually urges us. The genius in this book is not, and never was,  the writer’s, but the printer’s. I once spent three hours in a library with a copy of the Aldine edition of Hypnerotomachia Poliphili,  and I have never known a book  take my breath away so consistently. Every page is a masterpiece: the dance of text with the more than 170 woodcuts; the firm, male stature of the typeface; the crisp spring of the impression; the elegant proportion of the page — all combine to an end in which the craft of printing and design carry the text into an atmosphere not of its own making. This new edition has the appearance of a fine actor in a part lately played by a great one. Here are the signs of the grace that greatness lent the commonplace five centuries ago; and in these signs, the commonplace finds here another advocate for its small claims to our time.

Crispin Elstead is the Co-proprietor of Barbarian Press in Mission, British Columbia.