Half a century after he died, how best can we commemorate, indeed celebrate, the work of the finest Welsh poet of the Second World War? It is a question that has no easy answer. A commemorative volume must either reprint all his published work stories, poems and letters — or a selection. Wisely, the Gregynog Press has elected to publish a judiciously chosen selection of his writings — those which concern the poet and his relationships with people and places in the wartime army in an alien environment. The experience of India was so massive and strange, in a way so totally incomprehensible, that it would have challenged and unsettled anyone, and especially a man of more than ordinary sensibility. Lewis was such a man. The experience of being a married man, cut off from home and every domestic tie as well as the ‘dear familiar’ environment of Wales undermined him. But not totally; The selection makes clear how he set himself desperately to come to terms with a world so different, so un-himself that the huge imaginative and moral effort was barely endurable. But by dint of much struggle of thought and feeling the very situation fed directly into ‘that single poetic theme of love and death’ which preoccupied him until his own mysterious death in Burma on 5 March 1944. 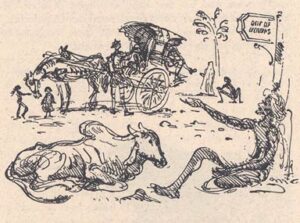 This selection of Lewis’s writings from India is finely representative and coherent. It conveys with great skill and sensitivity the intensity of his response to the conditions and problems of being in a much troubled India in wartime. One can therefore hope that this book will encourage readers unfamiliar with Lewis’s earlier writings about life in the army in the early stages of the war, for they in effect presage the Indian experience.

As one would expect, the Gregynog Press has produced a book of quiet distinction. Because its presentation is so deliberately understated, Inwards where all the battle is…  does not have the air or appearance of a commemorative volume. One could wish for nothing preferable in choice of paper, typeface, layout or binding. And thanks to his own Indian background, and his first-hand awareness of both the country and its people, David Gentleman’s drawings accompany with wit and appropriateness the sheer livingness of the writing, whether in letter, story or poem.